When I hear the term “spirit animal,” I think of the whimsical neck and winsome body of the giraffe (although the phrase denotes a far deeper meaning for indigenous cultures). When we moved from southern California to the Pacific Northwest, where forests meet yards, even in housing developments, I got the idea I’d like to somehow build a life-size giraffe, a stately, elegant creature reaching for the leafy tree tops outside my windows.

On the entrance road to the Portland airport life-size horse sculptures made from what appears to be driftwood look like they are grazing on the grass. I studied the sculptures every time we drove by and consequently I switched to collecting driftwood. However, it turns out that the horses near PDX are actually cast in bronze, although the originals were crafted from wood   (http://www.artnet.com/artists/deborah-butterfield/). 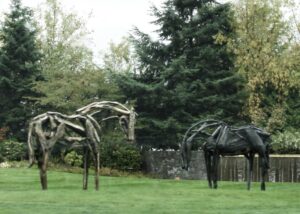 Beaten, broken, and bleached by sun, sand, tides, and time, driftwood is plentiful along the shores of the Columbia River where I hike and forage for fragments of thrown ashore. Most days I picked up anything interesting, turning it over, sometimes seeing the possibility of a jaw, a rib, a leg or flank, maybe part of a neck in the pieces. I dragged them back to my car and dropped the fragments under the trees and bushes around our house which began to resemble a boneyard. For years I had no idea how the pieces might fit together and form themselves into a convincing giraffe sculpture. Still, I continued to forage, collect, and imagine.

Meanwhile I searched online for directions on how to build a life-size giraffe from driftwood; they don’t exist, so I was left to figure this out on my own, which feels similar to my novel writing project. For many years I’ve collected stories and research from letters and art books about Van Gogh and Gauguin, their time together in the Yellow House, and the woman to whom Vincent handed his ear.

Her story has played at the edges of my mind for a very long time. Now, I’m putting the pieces together, constructing her journal. I’m still uncertain how it will all come together. So far it has been full of surprises. As long as I keep writing, keep believing the out-of-order scenes and scraps of dialogue will eventually assemble into a novel, the project progresses. When I allow it all to dumbfound or overwhelm me, I lose my way, but find it again when I return to the original idea–that art speaks, hence, ekphrasis –the story progresses forward. Writing is an act of faith. (sketches from Rachel’s journal) 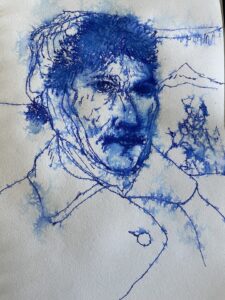 A few weeks ago, taking a break from the novel, or maybe as act of procrastination, I asked the hub to help me begin assembling the giraffe. This size art project had to be one of collaboration. I consulted my drawing and measured the driftwood pieces I might begin with, laying out the proportions to resemble those of a young giraffe somewhere between 10 and 13 feet high; a full-grown giraffe can be 20 feet tall.. 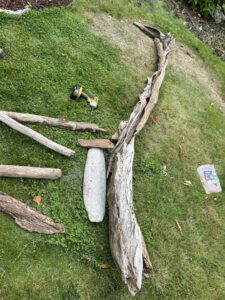 Originally I wanted to resurrect the giraffe in our front yard, off to the side, so I laid out the wood on our tiny front lawn and gathered the pieces that suggested a torso. John fastened them together with screws, some 6″ long. For every three screws he put in, I asked him to remove two. Indecision and experimentation. Eventually we had a better idea of what worked, (and how expensive 6″ screws are). If I overthought the points of connection, we’d never finish. 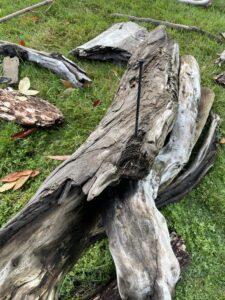 After a few days of this we were ready to add the limbs, brace them, and let it stand on it’s own four legs.  Standing back, I saw it resembled a gawky, headless, prehistoric stick-figure. Uncertain how ungainly it might turn out, and noting how heavy it already was, we relocated the half-carcass to our side yard. We live in a neighborhood with an HOA and rules about what’s acceptable in the tiny front yards. I’ve never seen any rules about giraffes, but at this point I wasn’t sure it would be recognizable as the elegant animal I envisioned. 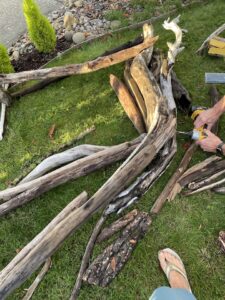 Once we placed the body in the side yard we attached the core of the neck, a long, thick, twisted branch. We’d already built and fastened the head, realizing that once the neck was on, we would no longer be able to reach to top, even with our tallest ladder. And our back yard is a steep bank leading down to creek. We had to build up a platform to stand the ladder, precarious at best.

The neck had to be placed deep inside the torso so the weight of it wouldn’t topple the whole being. When it was finally in place we stood back to survey our creation. The head now reached for the sky at an amusing, if not impossible angle. If it had been easy to reposition the neck I would have, but John had almost fallen from the ladder when we tried to put the neck on the first time. At this point in the process, I was willing to accept anything close to a giraffe likeness. Stepping away again to evaluate, I saw the giraffe was clearly throwing back her head, laughing at us. 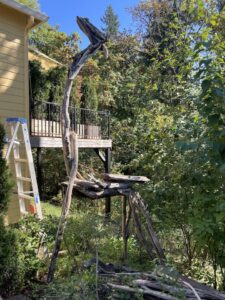 When I envisioned the giraffe we would build, I pictured a somewhat whimsical but elegant creature. This giraffe clearly had different ideas, but we went with it. While we were adding more bulk and skin to the torso, gluing moss over screw holes, our oldest son called from Missouri.

Tell him we’re building a giraffe out of driftwood, I said, wanting to finish the project.

On speaker phone I heard him say, I wondered when you were going to get to that.

When John got off the phone I asked if he’d previously mentioned the giraffe project to our son.

No, my husband said, that’s his version of ‘Of course you are.’

Later I sent our son a photo. He texted back, …I can’t believe how convincingly shaped it is, especially the torso. It looks like the wood wanted to be a giraffe. 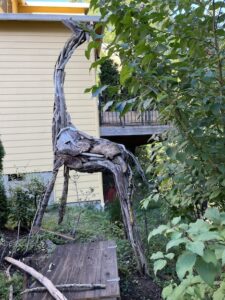 This morning I stared out at the almost complete giraffe while I sipped coffee, thinking about my need to trust my creative process. Even when the story takes on a life of its own and rears its head back to laugh at my plans, I’m better off to go with it, to trust the process and let the story that wants to be written find its way onto the pages.

Now that I’ve been through the process of constructing a life-size giraffe from driftwood, and lived to laugh about it,  I’m going back to work on my novel. I don’t know what draft this is. I’ve rewritten some parts 10 or fifteen different ways; other sections I haven’t written yet, so is it a first draft still? Or 13th? Maybe I’ll just call it the laughing giraffe draft and press on. 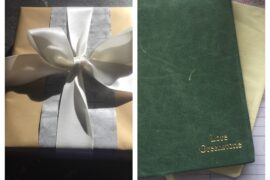 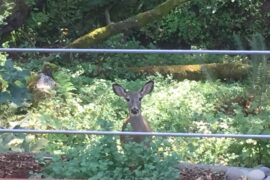 How is NaNo Serving You? 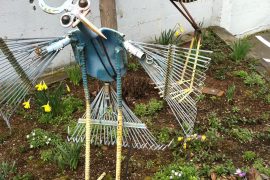 Make Nanowrimo Work for You 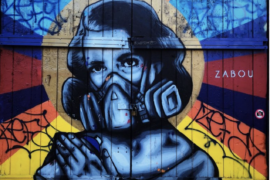 May is Almost Here-mamomemo time! 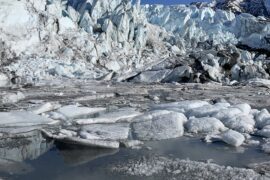