The neatly made bed, the dress thrown off last night, last thing, laid out now, like it is just waiting to slip back over my body. The way dresses are nowadays, it even has curves built in.

The dress was on the floor when I left this morning, the curtains still drawn in semi-darkness, my excuse for not picking up the dress. The hub was still asleep, having worked until 1 am. I got the youngest off to school then headed for an appt. I had thought I might throw the dress back on in the morning, it being an easy choice, unlikely to wrinkle as it lay on the floor all night waiting for my body to reanimate it.

The day before I had been wearing the dress when I asked him, again, if he would move the heavy bag of peat moss off the deck and back down to the garden bench. I had asked a few days before, sighting it through the french door of the dining room, hoping to get it moved before our daughter’s friends came for Prom dinner at our house. She wanted dinner out on the deck with white lights strung around if weather permitted. In the end, and the rush of getting ready both the peat moss, the lights and alfresco dining were abandoned. But the next day I went out to rearrange the patio furniture and pots, newly freshened up with peat moss, and called to him over the upstairs deck. Could he please take the bag down before he quit for the day? To make sure it happened this time I dragged the bag of soil amendment inside the house, just inside the door. A few minutes later, as I watered the plants, he came out and asked where the peat moss was.

I opened the door and pointed to the huge bag he had to walk around to come out onto the deck.

“How could you miss that?”

Sheepish, and boyishly cute for his age, he admitted, “I was looking at you.  At your behind.”

Once, long ago, I might have been annoyed, but now I laughed. We laughed together.

He is gone to work again when I see the dress laid on the neatly made bed, The dress I left on the floor. Sometimes we miss each other by minutes, or hours. And then I notice signs of what he did before he left. The dress, laid out on the bed looks soft and inviting. But it also makes me think of the times I have looked at his cast off clothes, a rare pair of underwear left on the floor in the bathroom, and I have left it there, a test to see how long it will take him to notice and pick it up. Or I have kicked his underwear aside, not lowering myself to pick up after a man.

Sometimes the problem with being feminist is how fierce it makes me, how everything becomes a symbol of a dominating patriarchal society. Seeing my dress laid out by his hands brings a wash of tenderness over my fierce resolve, and in its place a desire to handle things with care, so that when he sees them again he knows love, the kind I feel seeing my dress laid out on the neatly made bed waiting for me.

I am the mother of three daughters, each born in a different decade, and three sons in a somewhat closer clump. One "hub" hold us together. This is not what passes for wise family planning in American culture, but as the beat poet Alice Notley wrote, “I didn’t plan my pregnancies. I’m an experimentalist.” When I was writing Ekphrastic Mama for Mothers Creating/Writing Lives: Motherhood Memoir, I took stock of our family span: with one child married, one in college, one in high school, one in junior high, an elementary schooler, a toddler, and now a grandbaby, I realized that I was experiencing all phases of motherhood simultaneously. And so far I've lived to tell about it.

Power of the Journal 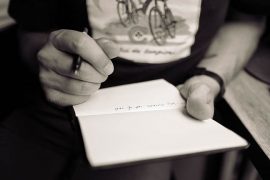